Literature / Of Rajahs And Hornbills 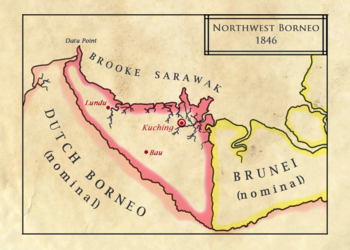 The Kingdom of Sarawak, just before it started to nom Borneo for breakfast.
Advertisement:

What happens when you put a British adventurer on the farthest end of the world? And give that man a crown?

Of Rajahs and Hornbills is an Alternate History timeline on AlternateHistory.com, written by forum member Al-numbers. Told in an epistolary fashion, it deals with the real-life case of the Kingdom of Sarawak

, a historical state on the northern portion of Borneo island that existed for around 100 years.

However, the kingdom's rulers were anything but local.

In fact, Sarawak was governed from beginning to end by the most peculiar foreign dynasty in history: the Brooke family of Great Britain.

Despite the royals' foreign nature, and with the land housing a majority population of Malays and indigenous Dayaks, the adventurer-state managed to actually run itself decently (albeit not peacefully) under the 'White Rajahs' for a while before eventually succumbing to stagnation, finally blowing out by the Japanese invasion of the Pacific in World War II.

Here, a subtle Point of Divergence results in a Sarawak that is more active, confident, and dynamic on the world stage, thereby altering local, regional, and world history as they know it.

The timeline can be read here

Tropes appearing in Of Rajahs and Hornbills include: