Literature / Cantata in Coral and Ivory 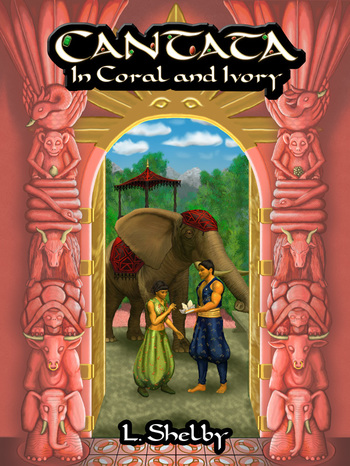 Cantata in Coral and Ivory is a fantasy romance novel about Isde Ikhsior, the newly appointed Eplikil of Seteblite. Ikhsior was not expecting to inherit the family title, and is rather unprepared for life as a noble. He'd much rather go back to being a sea captain than stay at the Coral Palace, but it is difficult to leave without destroying his family's honor.

To make matters more complicated, Ikhsior receives a fantastic device that allows one to see things that are far away. The gifting song is vague as to the intent behind the gifting. When Ikhsior tries to return the favor with his own gift, it results in everyone concluding that Ikhsior is courting the eplikili Pesodi. Ikhsior can't correct this misunderstanding without hurting both of their reputations, which is a problem because Ikhsior is falling for Pesodi's cousin Bazomi.

There are seemingly no end to Ikhsior's problems. In addition to his romantic woes he has to traverse the social maneuvering of his fellow nobles, prepare songs to sing for every occasion, and deal with servants that refuse to give a straight answer. No servant would ever diminish his Lord by admitting that were ever anything less than eminent, including his scribe Deule, the narrator of the book.

The book also has a sequel of sorts in the form of Pavane In Pearl And Emerald, another book set at the Coral Palace, but a couple hundred years in the future.