Film / The Captain From Nowhere 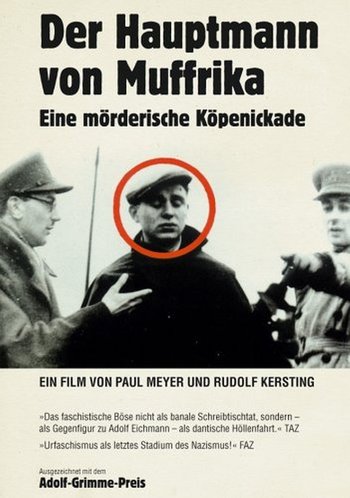 My first impression, I remember, was so startlingly different from what I had expected. I had read of all things he was supposed to have done, and then there was this boyish-looking figure... cheerful, bright and alert. It really was a total surprise.
— Dr. Allihn, Herold's defense attorney
Advertisement:

The Captain From Nowhere (Original title Der Hauptmann von Muffrika) is a 1997 documentary about the nineteen year old German private first class Willi Herold, who stumbled upon a Luftwaffe Captains' uniform shortly before the end of World War II and used the authority granted by it to gather a group of soldiers around him and to terrorize the Emsland region, culminating in orchestrating a bloody massacre in the Aschendorfermoor prisoner camp.

The documentary is notable for the numerous first hand accounts it presents, and has become a valuable source of information for historians interested in this rather obscure story.

This documentary contains examples of: