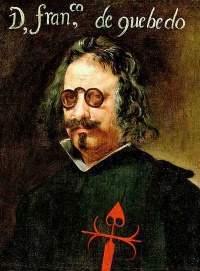 Known above all for his enmity with the famous baroque poet Luis de Góngora, for his defense of conceptism as a literary style and its many political quarrels, he is one of the most important poets and prose writers in the Spanish language.

Born into an aristocratic family, he was linked to the court and the highest echelons of power throughout his life. He was educated at the Imperial College of the Jesuits, and later at the Universities of Alcalá de Henares and Valladolid, focusing on theology and languages.

His friendship with the Duke of Osuna, and later with the Count-Duke of Olivares fostered his prestige, becoming a Knight of the Order of Santiago, although he had several falls from grace that pushed him into exile on several occasions.

Finally, due to the cases of corruption surrounding the Count-Duke and his suspicions of the author, he was locked in a small cell in the convent of San Marcos, from which he left with very poor health, retiring definitively to the Torre de Juan Abad, from where he moved to Villanueva de los Infantes, where he died.

Faced with his satirical and mocking texts, from his letrillas and sonnets, through his picaresque prose, as can be seen in his best-known work "History of the life of the Buscón called Don Pablos", his most serious poetry that reflects his recidivist theme stands out. focused on time and death. He also dealt with the political and philosophical essay ("The cradle and the grave") and was a well-to-do translator and literary critic.