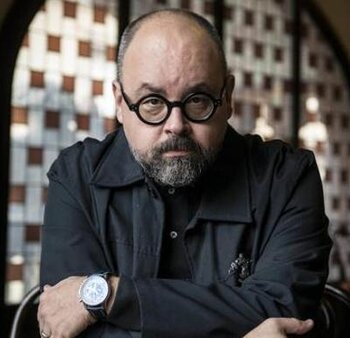 The master.
"Books are mirrors: you only see in them what you already have inside you."
Advertisement:

Although not very prolific in comparison with most authors of his level, having published only eight books before his death, Zafón went down in history as the most widely published contemporary Spanish writer, with fans hailing from 45 countries and speaking 40 languages. A bona fide reader and writer, who was just 14 years old when he first tried to publish a 500-page novel that disturbed editors, Zafón built some fame in The '90s with his young adult work Trilogy of Mist before making the jump to fame with the 2001 novel The Shadow of the Wind, after which he prolongued he story in a loosely-connected tetralogy named The Cemetery of Forgotten Books, which remains as his last and main work.

Prematurely deceased in 2020, Zafón left an unique mark in the Spanish literary landscape with his signature writing style, based on snarky narrators, dreamlike stories, highly evocative visuals, and tons of historical memory of his beloved Barcelona. He named as main inspirations 19th century classics, crime novels and noir fiction.