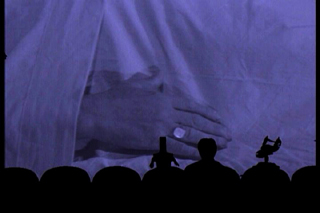 And seven days after seeing it, you will die.
I Feared Not
—Epitaph of Lewis Moffett

A 1962 "Horror"/"Suspense" movie, about the dangers of college fraternity hazing rituals, which is pretty much notable only for its appearance on Mystery Science Theater 3000 (along with an episode of the Film Serial The Phantom Creeps).

Lewis Moffett is a 42-year-old — er, fresh-faced young medical student who wows his college classmates with his amazing fearlessness. He watches an autopsy unflinchingly even as the others are fainting and getting sick, and he effortlessly kills a garter snake which threatens his nookie time with the girlfriend. But Lewis is harboring a Dark Secret: his bravery is a complete fraud. See, when Lewis was a little boy, he was forced to sleep in the same house with his just-deceased grandfather's casket, and as a result developed a secret fear of the dark and/or dead bodies.

Coincidentally enough, the leaders of the fraternity Lewis wants to join have decided to base Lewis' Initiation Ceremony around his supposed bravado: Late at night, Lewis must sneak into the masoleum where the body from the autopsy has been interned, and return with the corpse's ring. Unfortunately for Lewis, a screeching cat and a dead hand hanging up on his coat prove too much for him, and the middle-aged guy with the weak ticker — I mean, the fit young man promptly dies of a heart attack.

There's also some sort of subplot about a couple of overweight college lovers; this quickly devolves into an Overly Long Gag and eventually degenerates into Dude, Not Funny!, and really isn't worth going into here.