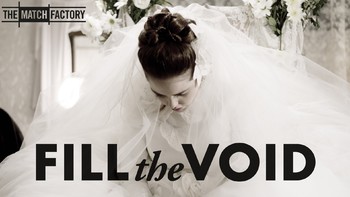 It's somewhat like Pride and Prejudice but recycled in an Hasidic community.
Advertisement:

Fill the Void is a 2012 Israeli drama film written and directed by Rama Burshtein. It focuses on life among the Haredi Jewish community in Tel Aviv, Israel.

It's Purim in Tel Aviv and everyone in the Haredi community is celebrating. The Mendelmann family in particular is celebrating the eldest daughter, Eshter, at the last days of pregnancy and waiting for the child to come. But tragedy ensues as Esther faints in the bathroom leading to an hemorragy. Despite the rush at the hospital, Esther dies giving birth to Mordecai leaving her family devasted.

A new problem surfaces as the now-widowed Yochay, Esther's husband, is expected to remarry as soon as possible by the Hasidic community, in order to give his son a stable family. His parents have suggested to him a young widow who lives in Belgium and he's considering the match. Rivka Mendelmann, Esther's mother and Yochay mother-in-law, doesn't want her grandson to leave the country and comes up with an unexpected candidate: her youngest daughter Shira. In her opinion, this would solve any problems, as Yochai need a wife, Shira was already looking for a match, and little Mordecai will be raised by someone of the family.

The problem is that 18-years-old Shira is a generation younger than her brother-in-law and very unexperienced about love and marriage. Also, she was proposed by a boy of her age and she wants someone she can grow up with. But since her mother is so desperate to prevent Yochay and her grandson to leave the country she decides anyway to give her brother-in-law a chance.

This movie displays the following tropes: