Fanfic / MLP Grief Is The Price We Pay 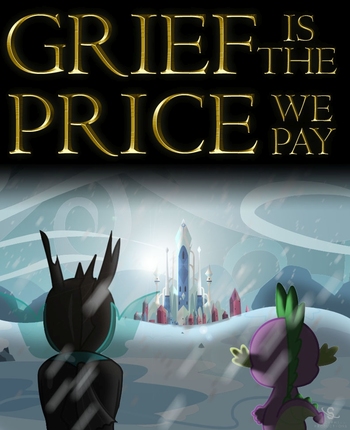 "I’m staying, Thorax. We're in this together now."
“…why, then?”
“Because you’re my friend. And good friends stick together. No matter what.”
“…even at great cost to themselves?”
“Especially then.”

Grief is the Price We Pay is a My Little Pony: Friendship Is Magic fanfic by Scyphi. You can read it at Fimfiction.net

The fanfic proposes the idea that, instead of everyone believing and accepting Throax's attempt at friendship, what if he was instead demonized and banished from Equestria, with Spike willfully following suit in order to protect his new friend. From that point on, the story follows the duo as they attempt to continue their lives in hiding while Twilight and company adamantly searches for them.