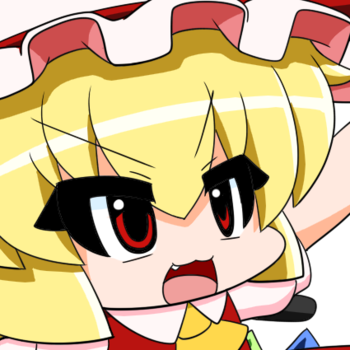 What nearly everyone knows him for.
"Many of Yamato Damashi's characters are loud, it seems. Well, the ones who speak at all."
— A commenter on a comic archive
Advertisement:

Yamato Damashinote Japanese name: 大和 だましis a Japanese artist and Flash animator. He mostly creates Touhou Project fan comics that contain portrayals of the characters that are a lot more silly than their official personalities, making for very silly stories from start to finish. His humor mostly relies on having characters beat the crap out of each other, some very ridiculous events, and a multitude of refrences to other Touhou fan artists. Yamato is mostly known for having one of the cutest portrayals of Flandre ever, who also happens to be one of the most mischievous portrayals ever, with a very, very short fuse. His Flash animations have probably spawned one of the wierdest memes on the internet.

Yamato has worked on: