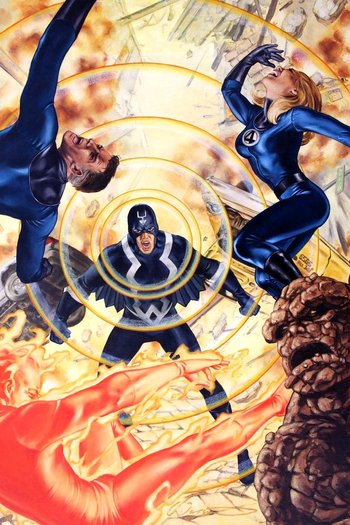 The Fantastic Four? He blows them away.

Introduced as a member of The Inhumans' royal family from their floating home city of Attilan, Black Bolt was exposed to Terrigen Mist while still in the womb, thusly born with the incredible (and destructive) power of a hypersonic voice. He can also fly, manipulate particles, and has displayed limited telepathy.

Because of the aforementioned hypersonic voice, Black Bolt was forced into seclusion for most of his upbringing, training in a soundproof chamber to control his power. Shortly after re-entering Inhuman society, he was goaded into using his powers by evil brother Maximus in a bid to protect Attilan, accidentally killing their parents and thrusting Black Bolt into kinghood. In the following decades, he married his cousin Medusa (with whom he fathered a son, Ahura) and encountered more figures from the greater Marvel Universe.

Like his fellow Inhumans, the Noughts saw Black Bolt become more prominent within the Marvel Universe, after headlining a twelve-issue limited series under the Marvel Knights banner. They also featured in various crossover events like Silent War, Secret Invasion, and War of Kings, further increasing their presence across the publisher's line of comics.

The New '10s continued Black Bolt's ubiquitousness, with the Terrigen Bomb on Earth leading to his joining The Illuminati in the pages of New Avengers, working alongside Iron Man and Professor X to save Earth-616 from an oncoming collision with Earth-1610. It failed. Inhumans: Attilan Rising, a Casablanca-inspired limited series set on Battleworld, portrayed an alternate version of Black Bolt who can talk.

Black Bolt was also one of the major figures in Inhumans vs. X-Men, even being framed for Cyclops' murder by Emma Frost. As part of the RessurXion soft relaunch following IvX, he'll be showing up in his first-ever solo title, written by Saladin Ahmed, as well as Royals, which centers on Black Bolt and his family searching for answers about their kind in outer space.

Outside of comics, Black Bolt has appeared frequently in other media. He's shown up in multiple cartoons based on Marvel characters, most notably Disney XD's Marvel Universe block, and leads in ABC's Marvel Cinematic Universe show Inhumans, played there by Anson Mount.