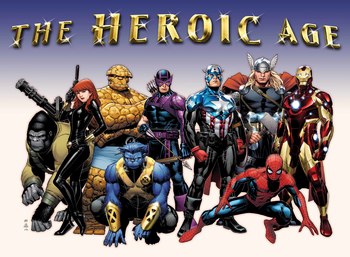 The Heroic Age is a 2010 comic book branding that ran through a number of books published by Marvel Comics. It began in May 2010, marking a major change in the status quo of the Marvel Universe after the events of the Siege crossover event, similarly to how The Initiative and Dark Reign dealt with the aftermath of Civil War and Secret Invasion, respectively. Compare to Brightest Day.

After Norman Osborn's downfall things seem to be going a lot better for superheroes — people love them again and old differences seem forgotten. But sinister threats are waiting just around the corner.

Do not confuse with the anime Heroic Age or Age of Heroes from Classical Mythology.