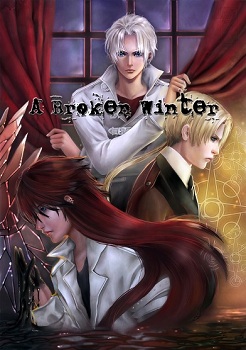 From top to bottom: Kokkan Kaneko, Kuroda Tadayoshi, and Reisen Kaneko
"No sun. No future. Life beyond Earth is an exercise in tolerance to extremes, and that includes more than the weather."
— Official summary for A Broken Winter

A web comic written by Kale Night and illustrated by Archie-the-Red-Cat, A Broken Winter follows three central characters; Kokkan, a heavily traumatized child who grows up to be a flippant, sarcastic teenager, Kuroda, the soldier who raised Kokkan because the boy reminded him of his own murdered son, and Reisen, a doctor who is accused of terrorism after he uncovers some unsettling truths. The story primarily takes place in Terasu, one of two remaining countries on the planet, which uses chemical means to keep its citizens docile and is known for brutally enforcing compliance with the government. Sound familiar?

There are currently two threads to the story. The first deals with Kokkan and Kuroda and how they met. The second follows Reisen, a free spirit who discovered the government's darkest secret when he learned the mysterious origins of "Moon Sickness" which is also called Tarqila. The two threads are tied together by the fact that Kokkan also happens to be Reisen's biological son.

Most notable for being unflinchingly dark and often times brutal. It also only updates as chapters are completed, with the typical update window being a few months long. It is NSFW due to graphic images of blood and torture, but it can be read here

If you want to know more about the world, the glossary and character page is here

Currently there are 11 chapters posted.

A Broken Winter contains examples of