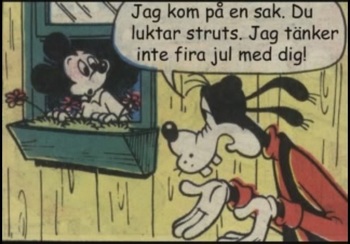 "I realized something. You smell like ostrich. I'm not celebrating Christmas with you!"

Super Mario Långben: "I'm gonna blow up your boat!"
Myspersson: "Great! Then I'll help you out!"

Super Mario Långben ("Långben", meaning "long-leg", is the Swedish name for Goofy) was a series of Swedish web cartoons created by the team of Simonize and Woodgrove. In its essence, "Super Mario Långben" is a collection of defaced Disney comics with the speech bubbles altered to display insane, nonsensical dialogue, read out by a monotonous, text-to-voice program and set to droning synthesizer music. The Norwegian version of That Other Wiki sums it up, accurately:

"The plot is often illogical and lacking in meaning. Reoccurring themes are drugs and the characters comically misinterpreting picture details."

Even though most of the stories are about Goof.. we mean Super Mario Långben, other characters also show up, such as Myspersson ("Cozy-Person") and Mongo från yttre rymden ("The mongoloid from outer space").

I'M AFRAID OF EVERYTHING IN THE WORLD! AAH! TROPES!: