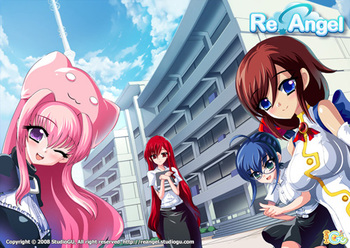 Re Angel is a 2008 Urban Fantasy visual novel by Studio GU, a Thai indie visual novel company. This novel is a remake and reboot of Angel's Tale, a 2004 visual novel. Re Angel is known for being a non-Hentai Bishoujo novel.

The story takes place in Thailand, and begins when Prat, an Ordinary High-School Student who can see the supernatural (including System of Fate skyscrapers), finds himself in the midst of a conflict between Angels and Demons. There are four women you can befriend. If you choose one of them in a certain situation, it puts you on that character's route, and the choices you make in that character route determines the ending.

Unfortunately, there's no official English translation available right now. (However, they did release an official Japanese translation in the past...)

This page is currently on Works Needing Tropes due to lack of tropes as a result of being a Thai-exclusive language work.