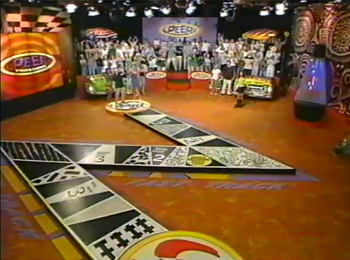 The Peer Pressure game board. Or -BLANK- Pressure if you're watching season 3.
Advertisement:

Syndicated teen-oriented Game Show where, in the grand tradition of Video Village and The Mad Dash, three teenagers played a life-sized board game hoping to win prizes. Players consulted the Magic 8-Ball to learn their category (and in the case of 2 of them, how many moves they could earn), of which there were four in all:

Failure resulted in going back two spaces. Much like an actual board game, there were also bonus spaces that made the player go back or forward additional spaces. After every cycle of players was a "Pop Quiz" question, which was worth three spaces (and required running to the buzzer).

At the end of the game, the top two contestants advanced to the Pressure Cooker Bonus Round (which was basically a first-to-three version of the Decision questions), while the last-place finisher had to give out food to the Studio Audience. No, seriously.