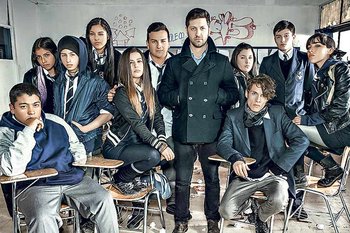 El Reemplazante is a chilean TV series who aired on Televisión Nacional de Chile (TVN) between 2012 and 2014.

After a risky financial operation who lead him to a three-month prison sentence, former financial executive Carlos "Charly" Valdivia (Iván Álvarez de Araya), went from having a very comfortable life, to living with his father Dionisio (Sergio Hernández) and his brother Pancho (Roberto Farías) in the commune of San Miguel, in Santiago. His new life leads him to take the job of math teacher in the Príncipe Carlos school, where his father works as a inspector, and his brother also works as a teacher. Having a harsh beginning, sooner Charly starts to slowly gain respect from his students, and at the same time to realize about the tough reality of them, the problems they face, and their dreams, repurposing his own life in the process.

The series premiered one year after massive protests were helding in Chile, demanding free and quality educationnote Specifically, the protests demanded a better participation of the state in public education, and the end of the for-profit education.. It was acclaimed for both the realistic representation of the students of low income families, and the state of education in Chile.

Currently both seasons are available on Netflix.