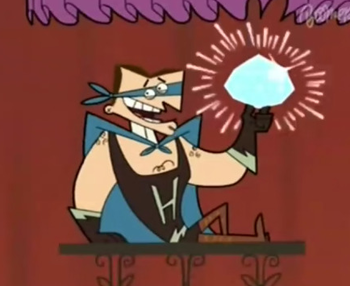 The Time Squad satellite is falling to the earth. From the inside we see that the interior is in flames and the guys are tied up, lamenting over their soon to be demise. The person who has committed this crime is none other than George Washington, who has turned into a raging, evil villain set out to destroy the Time Squad.

Tuddrussel manages to get up, with Larry and Otto in tow, and fight Washington. In the skirmish, Washington tries to hack Tuddrussel with his ax, but hits Larry instead, and cuts the ropes off from all three. They end up knocking him over to the transporter and try to send him back to 1789. But it's too late for them, the satellite hits the earth and explodes, taking the guys with it.

Or so the virtual reality game would like you to believe. The guys remove their helmets and we see that they were in no real danger. Through exposition, Larry explains to Otto that the game is meant for simulating real mission scenarios for training time cops, but Tuddrussel complains that they wouldn't have had such a difficult mission if Larry hadn't invited "virtual George Washington" onto the satellite to begin with.

The alarm goes off, and it's shown that the mission is to help out Harry Houdini. Otto explains to Larry and Tuddrussel that Houdini was an escape artist and one of the greatest magicians who ever lived. Tuddrussel complains as they leave about how much he hates magicians because they never reveal their secrets.

They arrive in New York City, circa 1895, and immediately find a disturbance in the area. A jewelry store has been broken into and robbed. Everything valuable was taken and in their place white rabbits were placed around the store. Two police officers are at the scene when the Time Squad arrives. Tuddrussel introduces himself as "Detective Officer Buck Tuddrussel, from the future. What seems to be the trouble?" This makes the officers very happy and immediately call Tuddrussel "Future Man", thinking that he's a superhero. Of course, Tuddrussel takes a liking to this. The officers go on to explain that they think a criminal mastermind or a "super-villain" is behind the robbery. Larry finds a clue, a card that reads, "To find out how this robbery occurred, simply say the magic word." Only Otto figures out that the answer is, "Abracadabra", which unlocks a puff of smoke to pour from the card and spell out "HOUDINI". Tuddrussel and Otto start to try to solve this mission pretending to be a pseudo-Batman and Robin duo, much to Larry's annoyance. Larry tries to get them to stop when an alarm goes off somewhere close by and the team goes after the robbery in progress.

At the Bank, Harry Houdini has tied up the guards and leaves his "captive" audience in wonder as he robs them willingly by entertaining them with magic tricks. As he tries to make an escape, the Time Squad appears, ready to arrest him. Tuddrussel, or "Future Man" tries to disarm and capture him, but Houdini is too quick and puts on a good fight using his bag of tricks to aid him. When Tuddrussel does eventually catch Houdini and handcuffs him, it doesn't hold him, he escapes with the stolen money and valuables.

When Larry asks about what happened, the guards that were bound and gaged only tell how "amazing" Houdini was at magically tying them up and stealing everything in the bank. The crowd agrees, hoping to see more of the robber's feats. Otto gets an idea based on the crowd's love for Houdini, involving a hoax unveiling of the "World's Biggest Diamond" and waiting for Houdini to catch the bait.

At Houdini's home, the man happens to read the newspaper and becomes excited to see the headline about the unveiling, planning on stealing it and making the event his greatest escape ever.

At the event where the diamond is being held, the guys wait in disguise for Houdini to show up. The Governor of New York announces to the crowd that he's proud to show them the diamond. When he unveils it to the public, Harry Houdini is revealed while holding the gem in his hand and the crowd goes wild with applause. Houdini announces to his audience that before he performs his next trick he would like to select a volunteer to help him in his act. Tuddrussel comes barging in onto the stage and knocks him out, much to the disgust of the audience.

Otto chides Tuddrussel for ruining the plan and tries to help Houdini back up. He asks Houdini why he's been robbing places, to which he responds that he can't afford the life of a super-villain when he has to buy smoke bombs and skin-tight clothing all the time and has to resort to a life of robbing banks. Otto reasons with him, telling him that people would just pay him money willingly to perform his tricks without robbing them. Houdini never thought about that, and after seeing that the people do intact love his illusions, he decides to just use his magic tricks for good. He's so overwhelmed, he doesn't know which trick to do now. Otto gets another idea and whispers the plan to Houdini. Larry starts to type in the coordinates for home as Houdini throws a curtain over them. Houdini shouts, "Abracadabra!" just as the guys get zapped out of the room, completing Houdini's marvelous "trick".