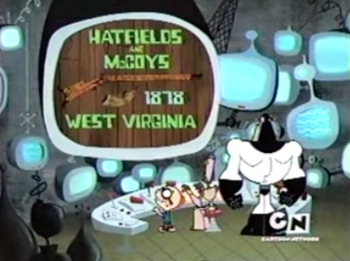 It's after dinner on the satellite when Tuddrussel brings out Larry's diary that he had broken into and proceeds to read out embarrassing passages for Otto to hear. Larry is completely calm and reserved as Tuddrussel thinks he's humiliated him. When Tuddrussel asks if he's hurt by his actions Larry tells him he's not and swiftly brings out his own ammunition: Tuddrussel's yearbook from Time Squad's Academy. Larry reveals to Otto, much to Tuddrussel's shame, that he had a weight problem and even went to a fat camp for one summer vacation. This gets to Tuddrussel, and he storms away defeated and in tears. Impressed, Otto asks what made Larry stand up to Tuddrussel like that. Larry tells him with pride that he had been reading a self-help book from the 1980s entitled "Bustin' The Barrier" by Thor Robertson. It basically teaches adults to stand up for themselves against their oppressors.

This sets off their next mission: to help the Hatfields and McCoys. According to Otto they were supposed to be two hillbilly families in West Virginia that were famous for a never-ending feud. But when they get there they immediately see what while the Hatfields are indeed a hateful bunch who shoot people at a whim, the McCoys are just simple folk with no backbone to fight back. After witnessing William, the patriarch of the Hatfields walk all over Randall McCoy and his kids and take their food and household possessions, Larry makes it his business to teach the McCoys how to fight back the Thor Robertson way.

With a little work, including flash cards and cheesy self-help mantras, Larry manages to make the McCoy family confident in themselves. This worked a little too well, as the next time William Hatfield comes by to terrorize the family and steal the roof of their house, Randall McCoys yells at William and tells him that he's sick and tired of him and his family harassing them. William becomes deeply regretful and sees the error of his ways and apologizes for the way he and his family have acted and promises to mend his ways. The two shake on it and become neighborly. While Larry is satisfied by how things have turned out, Otto and Tuddrussel are irritated that Larry isn't seeing the problem in the fact that the two families are "Loving" and not "Fighting".

Otto and Tuddrussel then formulate a plan to get back at Larry for the whole yearbook episode and fix the mission as well. They start pulling pranks on the two families; On the Hatfield side, they steal a scarecrow from their cornfield and allow crows to ruin their crops and throw bombs into their outhouse as William is about to use it. They also write on their house, 'McCoys Rock!' with paint. On the McCoy side, they pour cement into their well and paint 'Hatfield's Rule!' on their house.

The families see this and angrily claim "It's feudn' time!" and all at once begin to shoot each other from their respective property. All the while Larry is broken up over how his plan to help the families failed.