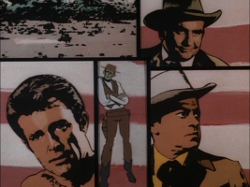 West is wounded while guarding a shipment of smallpox vaccine and both he and the vaccine disappear, having been hijacked by outlaws who leave Jim for dead. The Secret Service receives an ultimatum: pardon and free Furman Crotty (Edward Asner), a nihilistic crime lord currently serving time in Leavenworth, or the vaccine will not be returned. Since waiting six days for a new supply means that many more people will die of the disease, the thieves' demands are met. Gordon sets out to follow Crotty, find West and stop an epidemic in the making. And finding Jim won't be easy, since the outlaws' attack left him with amnesia and he's wandering around trying to remember who he is...