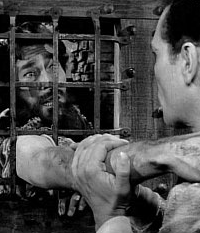 Please, help me!
Rod Serling: The prostrate form of Mr. David Ellington, scholar, seeker of truth and, regrettably, finder of truth. A man who will shortly arise from his exhaustion to confront a problem that has tormented mankind since the beginning of time. A man who knocked on a door seeking sanctuary and found instead the outer edges of the Twilight Zone.
Advertisement:

The story is told in a flashback by an American called David Ellington. While on a walking trip through post-World War I Europe, Ellington becomes lost, is drenched by rain and seeks shelter in a nearby castle (Wolfring Castle). He is told to leave immediately, but he collapses, shivering.

Upon waking inside the castle, Ellington hears a wolf-like howl and goes to investigate. In the bowels of the castle he finds a bedraggled, but apparently cultured and intelligent man in a cell. The man claims to be a prisoner of an insane religious order, locked up because he kissed his sweetheart in public.

Ellington is seen talking to the prisoner, and is taken to a meeting with the leader of the order, Brother Jerome (John Carradine), who explains that the prisoner is not a man, but rather the devil himself. He has been locked up in the room using the "Staff of Truth" to bar the door since shortly after World War I. He came to the village to corrupt it, but Jerome recognized him for what he was and imprisoned him. His actions have given the world five years of relative peace. Ellington becomes convinced that Jerome is insane. Fearing for his safety, he pretends to believe the incredible story. Jerome is not fooled however, and assigns another brother to watch him.

Ellington waits until his guard falls asleep and creeps down to the cell. Seeing that the staff which held the door shut was easily within reach of the imprisoned man, Ellington briefly wondered why he did not remove it himself. At the man's urging, he removes the staff barring the cell door and releases the prisoner. When the prisoner exits the cell, he pins Ellington to the floor with a wave of his hand and begins to change, taking on the appearance of the devil with each step before departing the castle in a plume of smoke.

Jerome finds the collapsed Ellington and sadly explains that the inability to recognize the devil has always been Man's great weakness.

The flashback ends. Ellington explains to the hotel maid that he has spent the time since then hunting for the devil to atone for his mistake, through World War II, the Korean War, and the development of nuclear weapons. He finally succeeded; he has him locked in a closet and intends to return him to the castle and Brother Jerome's keeping. He warns the skeptical housekeeper not to remove the staff holding the door closed under any circumstances while he goes to make his final preparations.

After Ellington leaves, the curious woman, disbelieving his story, removes the Staff of Truth barring the door.

For the original short story this episode was based on see The Howling Man.

Rod Serling: Ancient folk saying: 'You can catch the Devil, but you can't hold him long.' Ask Brother Jerome. Ask David Ellington. They know, and they'll go on knowing to the end of their days and beyond—in the Twilight Zone.
Feedback