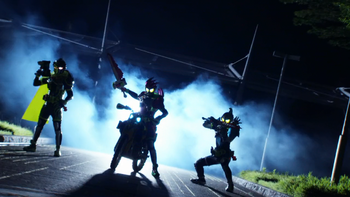 This is the tale of the Doctors of Hope and the Bugsters of Despair.

Though Gamedeus was finally destroyed at the cost of Poppy Pipopapo and Parado when they extracted the Bugster from his body, Masamune Dan survived and takes advantage of Emu no longer able to use the Muteki Gamer. The Kamen Riders are at a huge disadvantage, while Cronus doesn't hold back, and initiates Pause. Starting with Emu, all of the Kamen Riders' movements are frozen in time...