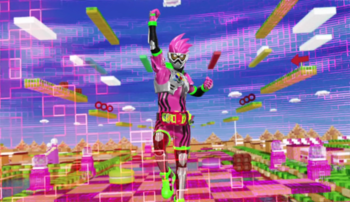 16 years ago, a young boy named Emu Hojo was struck in a traffic accident. He was only saved due to the brave efforts and determination of the surgeon who operated on him. This has inspired him to take up medicine. In the present, Emu is a pediatric resident at the Seito University Hospital, aiming to repay his "debt" by saving his young wards. The problem, however, is that he is an utter klutz who gets no respect from his patients or co-workers. Most of the time, it seems that the only thing he is good for are video games.

When one of his patients, Souta, escapes the hospital in order to attend the launch party for the newest entry in his favorite game series, "Mighty Action X", he decides to take him there. After all, the boy's dizzy spells may be caused by the over-excitement, right? Oh, how very wrong. Souta's sickness is no ordinary flu - it's the Bugster virus, an extremely dangerous threat born inside the digital domain, now somehow preying upon the real world's inhabitants. The infection turns Souta into a raging beast and he escapes into the city.

The only way now is to operate on him... but not in the traditional sense. Asuna Karino, an agent of the Ministry of Health, has been scouting people capable of using the Gamer Driver - a device capable of excising the Bugster virus from their host. She's been looking for the elusive M - the master gamer, who leaves no game unfinished. But Emu, determined to fix his mistake and save his patient, grabs the Driver and runs straight into combat. Asuna demands that Hojo returns the device, since ordinary people can't use it. But to her shock, he can use it, and very well to boot! And on top of that, the timid intern's attitude completely changed!