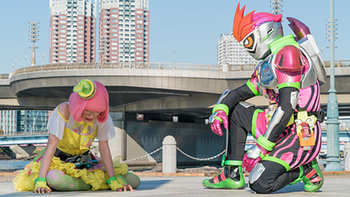 Emu managed to notice Poppy smiling after the Rider's battle against Lovrica. With her sudden change of heart, Emu believes that she was suddenly swept up in all the commotion. Although he was attacked by Kamen Rider Poppy, Emu does not believe she is a bad Bugster. When Kamen Rider Chronicle starts up once again, Poppy Pipopapo is summoned. When Emu confronts her, he shouts "You aren't like this!" to her, just as she appears to deliver the final attack at the Riders who violated the game...