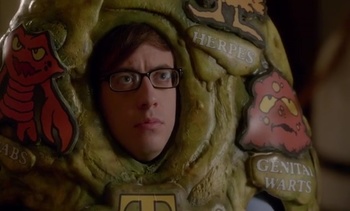 Ladies and gentleman, a visual representation of the state of Glee at this point. Also, Kevin McHale, you poor bastard.
Advertisement:

Artie tests positive for an STD and is forced to tell all his sexual partners, as well as the girl he has a crush on. Blaine's personal insecurities lead to relationship problems between him and Kurt. When Mercedes reveals that she's still a virgin, Sam tries to prove that he's the perfect boyfriend in order to prepare her for her first time.

Next Time: Funny Girl's opening night, with Rachel's ego at its peak, and some welcome cameos... actually, one actual cameo and two psuedo-cameos from people still on the payroll. Because Glee. Face Palm.