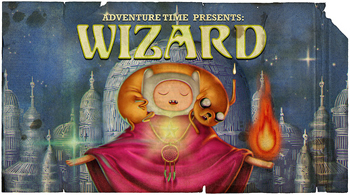 Finn and Jake join a wizard's guild, lured in by the promise of free powers.