Music / Lady A
aka: Lady Antebellum 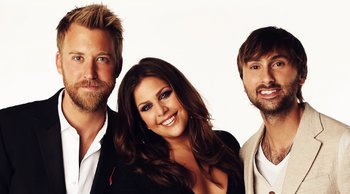 Left to right: Charles Kelley, Hillary Scott, and Dave Haywood.
Lady A (formerly known as Lady Antebellum) is a Country Music group composed of Hillary Scott (daughter of 1990s country singer Linda Davis), Charles Kelley (brother of pop singer Josh Kelley and, by extension, brother-in-law of Katherine Heigl), and Dave Haywood. The band made an unassuming debut in 2007 as guest musicians on a Jim Brickman pop song. Shortly afterward came "Love Don't Live Here," which launched a moderately successful debut album. The last single from the release, "I Run to You," slowly became the group's first #1, and was ranked by Billboard as the biggest country hit of the year — quite a feat for the last single from an album.
Advertisement:

Then came "Need You Now," which launched the band's career into the stratosphere. That song had a super-fast climb to #1 on the country music charts, as well as the longest run at #1 on that chart in over three years. It then went into Serial Escalation, also topping both of the Billboard AC charts and reaching #2 on the Hot 100, in addition to reaching Top 20 (or close to it) in nearly every country that has a single chart. In short, it was one of the biggest country crossover hits ever. Third album Own the Night has also launched a rather big pop crossover in "Just a Kiss", but the album was criticized for its over-emphasis on midtempos, and its later singles fared poorly.

Golden, their fourth album, brought the group their fastest-rising chart-topper in "Downtown". After its second single "Goodbye Town" flopped, the group re-released the album with bonus tracks, including "Compass", produced by Nathan Chapman. Chapman also stayed on board for their New Sound Album, 747, in 2014, which produced another chart-topper in "Bartender" but also had diminishing returns otherwise. After its last single ended its run, Kelley announced that he would do a Solo Side Project, while Scott cut a gospel album with her parents and sister. The group reunited in 2017 for another New Sound Album, Heart Break. In 2018, they departed Capitol Records in favor of Big Machine Records. Their first album for the label, Ocean, was led off by "What If I Never Get Over You", but the followup "Ocean" was hastily pulled in favor of "Champagne Night", which the trio co-wrote on an episode of the TV songwriting competition Songland.

The group officially renamed to Lady A in 2020 in order to distance themselves from the word "Antebellum", which can be perceived as having racist connotations to the Civil War south. However, this move quickly resulted in legal entanglements with an African American blues singer from Seattle who also performs under the name "Lady A". The sides reached a settlement in February 2022, the terms of which have not yet been made public.