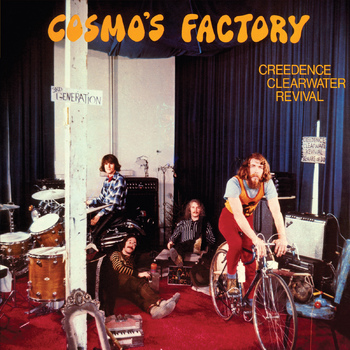 "Well I'm flyin' across the land, tryin' to get a hand, playin' in a travelin' band."
"Long as I remember, the rain been coming down.
Clouds of mystery pouring, confusion on the ground.
Good men through the ages, trying to find the sun.
And I wonder, still I wonder, who'll stop the rain?"
—"Who'll Stop the Rain"
Advertisement:

Cosmo's Factory is the fifth studio album by Creedence Clearwater Revival, released on July 16, 1970. It got its name from what drummer Doug Clifford - nicknamed Cosmo - called the Berkeley warehouse the band performed early rehearsals in: "The Factory". The three singles from the album: "Travelin' Band/Who'll Stop the Rain", "Up Around the Bend/Run Through the Jungle" and "Lookin' Out My Back Door/Long As I Can See the Light" all charted in the US Hot 100 and the album itself remained at the top position in the Billboard 200 for nine consecutive weeks.

Doo, doo, doo, tropin' out my back door: