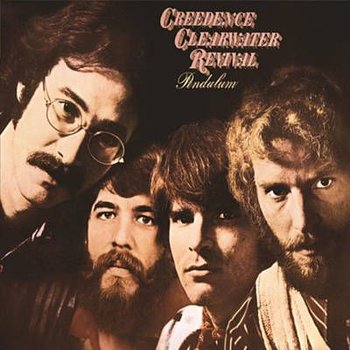 "I wanna know, have you ever seen the rain/Comin' down on a sunny day?"
"Pagan Baby, won't you walk with me?
Pagan Baby, Come on home with me,
Pagan baby, Take me for a ride,
Roll me, baby, Roll your big, brown eyes."
"Pagan Baby"
Advertisement:

Pendulum is the sixth album by Creedence Clearwater Revival, released on December 7, 1970 through Fantasy Records. It was the final album in which John Fogerty was the sole producer for the band, and was the only one in their discography to not feature a single cover song. It was also the final album to feature his brother Tom, who quit the band shortly afterward owing to longstanding tensions within the band. As a matter of fact, said tensions were the subject matter of their supporting single "Have You Ever Seen the Rain", which peaked at #8 in the US Billboard Charts.

Not to be confused with the 21st-century Australian-British band Pendulum.