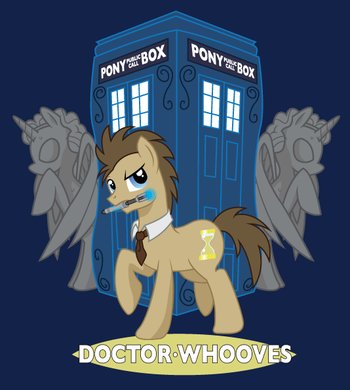 Every franchise will eventually have a crossover with every other franchise in some form.

In other words, if it hasn't happened yet, someone's probably working on it now.

This trope includes any type of contact between franchises, whether it be physical or merely conceptual. See the image, which combines My Little Pony: Friendship Is Magic with Doctor Who, two franchises with very different atmospheres, in a single piece of artwork.note Though, to be fair, the Doctor stand-in actually appears in the former show.

This can apply to a Common Crossover, or even a Massive Multiplayer Crossover, but not a Crisis Crossover, which features characters from the same universe.

One of the Rules of the Internet. Note that Rule 34 refers to prurient versions of single franchises, while Crossover Ship refers to romantic crossovers only.

See Weird Crossover for official examples, and Cosplay Fan Art for a selection of images involving characters from one franchise dressing up as characters of an another franchise.