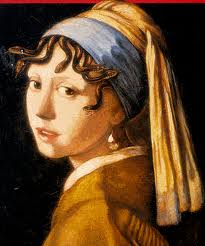 At that moment the waiter appeared with our starters. I'd ordered grapefruit but I found on my plate the sliced-off top of the head of Orpheus. It was inverted like a bowl from which I was about to spoon up the brain.
'Excuse me,' I said to Kraken and the others. I quickly wrapped the half-head of Orpheus in a napkin and made for the stairs.
'Is everything all right, sir?' said our waiter as I almost knocked him down.
'It's perfectly lodza nurvurli,' I said, 'thank you. '

If Neo had never found his way out of The Matrix, his life could have look similar to that of the protagonist of Russell Hoban's novel, which is a mix of Postmodernism, Magic Realism, and Greek mythology, with some wordplay and a pinch of Science Fiction. The result is very metafictional and full of dream logic, resulting in a total Mind Screw.

The main character, Herman Orff, who has a slight obsession over one of Vermeer's paintings and in his free time chats with a non-existing entity calling itself Kraken, makes a living by adapting greatest literary works into comic books, but in the meantime unsuccessfully tries to write a novel. Desperately searching for ideas, he finds an ad which claims that the advertised company is able to help the writers suffering from creative drought. It turns out that the ad had been made by the former boyfriend of the former girlfriend of Orff, but it doesn't stop Orff from using the mysterious machine activating neurons in the new regions of the brain. After using the machine, he finds the Orpheus' head in the sewer, picks it up and listens to its story, in which Eurydice seems to strangely overlap with a woman whom he once had loved. The hero tries to work things out. Unsurprisingly, things only go stranger.