Literature / Master of None 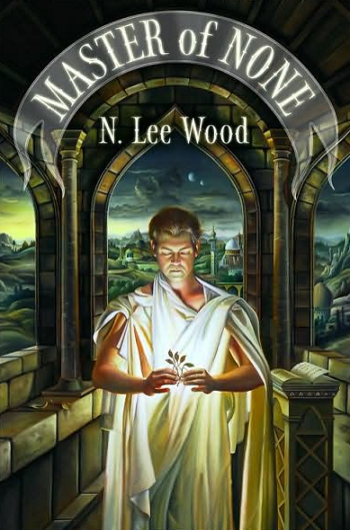 A novel by N. Lee Wood. It is a sci-fi/gender equality piece of literature.
Advertisement:

When botanist Nathan Crewe drops onto a secretive and xenophobic world's jungle, all he wanted was some plants. Some samples to make his name in a narrow field and maybe get a spot at a two-bit university. What he didn't expect was to be met by a ring of policewomen pointing state-of-the-art guns at him.

He gets shipped off to a hospital and is imprisoned in a whitewomb, an egg-like place for keeping comatose indivuduals. When he is finally let out, he meets the Pratha h'may of the Ngaesha, who takes him under her wing and teaches him the planet's matrilineal, male-suppressing language. When he recieves an offer of marriage to the heir to one to the Nine Great Families and meets a Pilot who he falls in love with, everything goes under. Not to mention the fact that he has adopted a boy with the same hatred of captivity and subservience they are locked into in that society, and his mother-in-law HATES him.

No relation to the 2015 Aziz Ansari sitcom.

Examples present in this work: