Podcast / Brony Foundation for the Arts 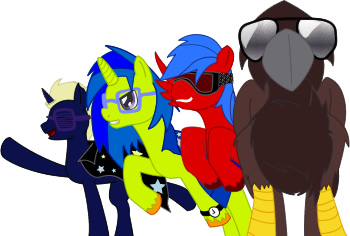 A Hippogriff, Laser Red Pegasus, and two Unicorns, What Could Possibly Go Wrong?
"Celestia does not want this to happen"
— Blue Chevre (on the Development Hell that the group has gone [and is still going] through)
Advertisement:

The Brony Foundation for the Arts is what happens when you take four normal guys, add a strong helping of MST3K (but forget the mantra), divide by sqrt(Troll Fic)^-1, and multiply in some candy-colored ponies.

The BFA, as it is colloquially known, is a group of four bronies who delve into the deepest recesses of the fandom to look for badfic to destroy. Somewhere between Podcast and Abridged Series and using the form of RiffTrax, they will attempt to read anything. Yes, even the Lemons, and in response to the question posed by the page image — everything that can go wrong, will go wrong.

Members of the group:

Works reviewed, in order they were reviewed.

To keep this as SFW as possible, only link to TV Tropes pages
Advertisement:

The Brony Foundation for the Arts (and some of the fanfic reviewed) provides examples of the following tropes: