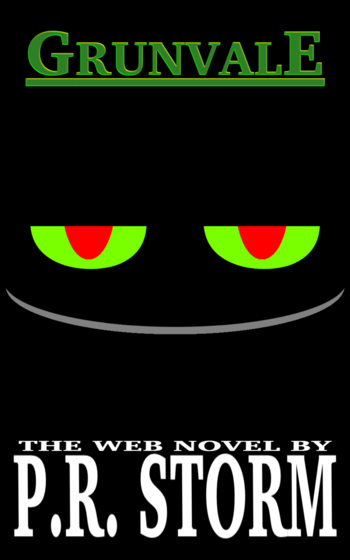 Grunvale is a serialized novel posted on DeviantArt, written by P.R. Storm and posted on his account, 'PhoenixOfGrunvale'. Set in a world of anthropomorphic animals, the novel focuses on a group of four eleven-year-old characters, collectively called the 'Oddball Tetrad', the drama in their lives, and the strange things they encounter in their town.

The story begins with Gilda Grime, a big-nosed, citrus- and retro technology-loving raccoon (referred to as a 'procyonine', the -ine name of a raccoon), who, one rainy night, decides to get revenge on her four abusive brothers by fixing up a sour drink with grapefruit, oranges, lemons and limes (which she calls the 'GOLL'). However, it works on Gilda's second-eldest brother, Truman, a little too well, burning and scarring his mouth and tongue and leaving him with impaired speech. When Gilda sees that Truman is now out for revenge for what she has done to him, she goes on the run. And the story only gets crazier from there.

The novel is written in an unusual style, where the third-person narrator (who refers to themself as 'this narrator') frequently breaks the fourth wall, to talk to the readers, state what they think about the story, and to critique the characters on their actions. It is also heavy on the pop culture references. The narrator does not shy away from stating what they think of certain movies, TV shows, music albums, video games, even celebrities. And can get pretty mean-spirited with their descriptions.

The DeviantArt edition of Grunvale can be read here