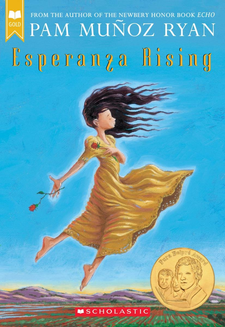 "Do not be afraid to start over."
— Abuelita
Advertisement:

Esperanza Rising is a Historical Fiction novel by Pam Muñoz Ryan, published in 2000.

Esperanza Ortega, the only child of a wealthy landowner, lives a charmed life on her family's ranch in Mexico. But when Esperanza's father is murdered and their ranch burns down, Esperanza and her mother Ramona flee with their servants and family friends to a migrant worker camp in California, right in the middle of The Great Depression. Missing her grandmother and her previous privileged life, unused to a life of hard work, and facing injustice after injustice, Esperanza struggles to rise above her current situation.