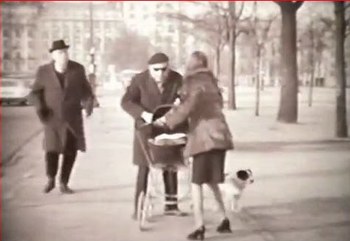 One-Eyed Men Are Kings is a 1974 short film co-directed by Michel Leroy and Edmond Sechan, written by Sechan.

The short, which is told without any dialogue, involves a rather sad middle-aged man in Paris. He is generally bullied and pushed around by everybody, including his landlady and his aged mother. The aged mother also makes him walk her dog—even the dog hates him. Walking the dog is an ordeal. People yell at him in the park when the dog hops up on a bench, a lady with a stroller yells at him when he bumps into her, and he can't go into the neighborhood park because dogs aren't allowed.

When the man bumps into a blind man with a service dog and observes the deference the blind man gets, he hits upon an idea. He gets some large sunglasses and pretends to be blind. Suddenly his quality of life is greatly improved, with everyone treating him with deference. He's even allowed into the park, where he makes a bunch of friends. Everything is great, until the dog slips out of his grasp and everything goes wrong.