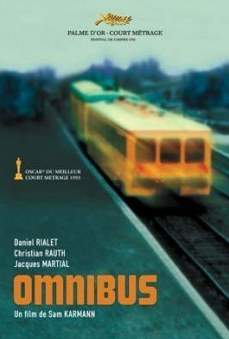 Omnibus is a 1992 short film (8 minutes) from France directed by Sam Karmann.

A man rushes onto a train in the morning. When the conductor comes by for tickets, the man finds out to his horror that the train no longer stops at his stop. It has been converted to an express and in fact will be stopping quite a bit farther down the line. The man, who is late and desperately needs to get off at his stop, begs the conductor and driver for assistance. Frantic, the man tells of the cavalcade of horrors that will ensue if he does not make his appointment on time.