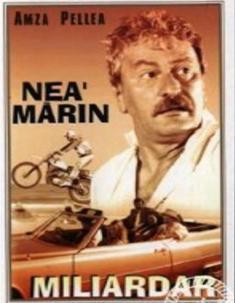 Nea Mărin Miliardar (Uncle Marin the Billionaire) is 1979 Romanian comedy film directed by Sergiu Nicolaescu. The movie is about the main character, Mărin Juvete who visits his nephew, Gogu which works at a hotel on Black sea resort. Meanwhile the daughter of the millionaire Mr Juvett is kidnapped by gangster who want to ask for a ransom of a million dollars.The Gangsters go to the hotel were Juvett was supposed to stay which just so happens to be the same hotel Mărin is staying in. Meanwhile a rival gang come to take the ransom for themselves and since Juvett and Mărin look identical they follow Mărin instead. Mărin also carries a briefcase similar to the one containing the ransom that Juvett is carrying and they even switch them around by accident a few times. Hilarity Ensues.