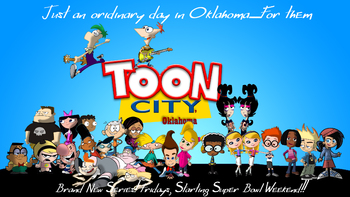 First, the Marvel Cinematic Universe had their fun and games, now it's their turn.
Advertisement:

. Who is well known on Deviantart for his work on the "Bearquarter's Toy Story" trilogy.

The author combines the universes of Cartoon Network, Disney XD, some Saturday Morning Cartoons we grew up with, DreamWorks Animation and Nickelodeon as well as a few other outside sources and original material, and places them in a town called Toon City, a fictional small Oklahoma town, and places the main kids in either everyday situations, or in situations in which one wouldn't normally see them in in their original shows, for example, Jimmy Neutron taking up Superman's mantle to honor

his late idol's legacy, or [[Western Animation/Beetlejuice Lydia Deetz]] dealing with and living with a bunch of clones of herself, no thanks to Beetlejuice. Either way, the characters hang out with each other and go off on either realistic adventures or whacky and zany adventures. While some of the cast remains more or less the same as their original counterparts, some characters were given added depth to their personalities to the author's liking.

The author came up with this while making a parody of the Spongebob episode, "Band Geeks", which can be read here

. Since then, he's been trying to start up his series, and after a while, he was able to get started with the series, which is slowly getting viewers.

The first two test episodes can be read here