What An Idiot / The Big Bang Theory 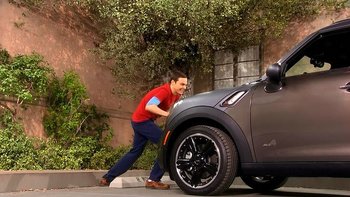 Has a PhD in physics. Still thinks manually pushing a 4000 pound car in Park mode is possible.
Sheldon: (to Penny) We've already established that I'm found in the periodic table.
Penny: Well, it's a table right? I mean, why can't there be food on it?
— Sheldon and Penny playing (or arguing over) the "Guess what element am I" game

Despite being affiliated with CalTech and sophisticated fields of science, the main cast of The Big Bang Theory can be quite stupid because having knowledge of physics, astronomy, calculus and medicine doesn't always necessarily mean having common sense. Usually Penny and Sheldon have the most "What an Idiot!" moments because aside from being self-centered jerks who constantly torment/exploit Leonard, they both are unable to properly function on their own which is why Sheldon can't even get his own car and license and Penny can't afford her own rent.

There are spoilers below. You've been warned.