Western Animation / Rowing Across the Atlantic 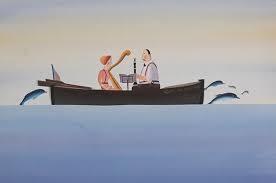 A French married couple set out in a rowboat in 1907, presumably to cross the ocean back to France. They aren't dressed very appropriately; the husband wears a suit and the wife wears a formal dress. Even more incredibly, they carry a harp and a clarinet that they play, in the rowboat, out in the open ocean.

In Real Life people who row across the Atlantic Ocean (it has been done) do it in six weeks to three months, but the man and the woman spend years, then decades, out at sea. They fight, and make up, and grow old, out together in the Atlantic.