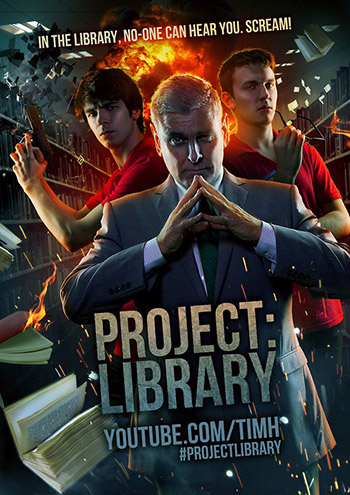 Project: Library is a four-part action/comedy YouTube series created by TimH and Jack Howard (as well as many other YouTubers) that premiered in October 2013.

Michael Foster is in a LOT of trouble. Seems that he never returned Rory the Dinosaur to the Battersham Library...which he checked out in the '80s. The library, which is in serious debt, and run by the totally crazy Troy Bennet, decides to collect on Michael's overdue fees, which add up to a million pounds (not dollars). At first Michael brushes off the library's calls, but when they kidnap his ex-girlfriend, shhhh gets real.

There are also several tie-in shorts, behind-the-scenes things, interviews, and other fun stuff hosted on the Multiverse channel

to promote the series:

Has an official tumblr