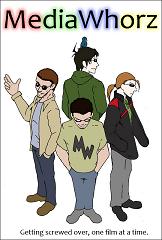 Getting screwed over, one film at a time.

These four members of the round table—Kora, Birdy, Caveman, and Jimmy Esco—do reviews of various parts of the media, consisting of Film, Live-Action TV, and Anime. First, one of the members would get the ball rolling by introducing the audience to the subject of their review, then all four of them would discuss it and talk about the positive and negative aspects of the feature. The round table member who started the discussion will give his score, then the three other round table members will give their scores. Then the same round table member starting the review will calculate the average of the scores that he and his friends conjured up, delivering it as a final verdict. Their score is on a scale of 1 - 10, and they give each rating a title:

Here are links to where

you can watch their videos