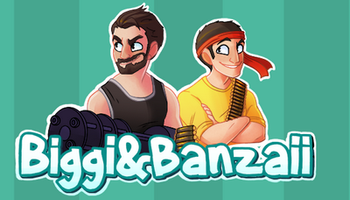 BirgirPall (often shortened to "Biggi" due to difficult phonetics), is an Icelandic gaming duo consisting of the titular BirgirPall and his friend Banzaii. They mostly do edited highlight reels called "We Broke" (formerly known as "I Broke") in which they aim to play the game in unintended ways often exposing game breaking glitches and bugs. In which they then laugh at the results. The duo began with comedic video montages of Battlefield 3, messing around in the game and "trolling" other players. The duo then began doing the same for other games, the rest is history.

. You can also support them on Patreon

BirgirPall breaks examples of these tropes: