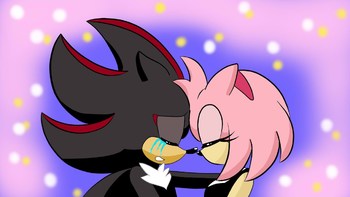 Love Forever (Spanish name: Amor por Siempre) is a short Sonic the Hedgehog fan comic uploaded as a slideshow video on YouTube with music and sound effects (hence the Web Animation namespace instead of the usual Webcomic), by Angel-De-La-Verdad. It centers on the pairing of Shadow and Amy.
Advertisement:

One day, Shadow and his young son Jake take the bus to a park to see Jake's mother Amy. As Jake approaches Amy, Shadow then thinks to a Flashback of the events that happened prior. It starts when Shadow and Amy were in a car and approaching an avalanche...

The original Spanish version is here

, while the English translation is here