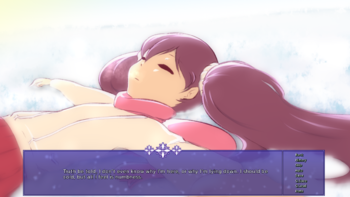 Truth be told, I don't even know why I'm here, or why I'm lying down. I should be cold, but all I feel is numbness.
"There are 'normal' people. Those people smile and talk easily, look people in the eye and laugh. Those people walk right up to strangers and talk to them, and come away as friends. They smile, they feel things, and they're just... Destined to be surrounded by people, it seems. They'll be successful and happy and loved.
Advertisement:
And then there are other people, who are like me.
We don't talk that easily.
We don't even feel very much.
At least, I don't."
—Megumi's narration, in the first scene

warm [sic] is a 2019 kinetic novel developed by butterfly-latte of KrispyCat, using the Ren'Py engine.

Eleven-year-old Megumi Shimizu's life is very monotonous, solitary...and cold. She believes her life will be unchanging and routine, and she will be friendless forever.

When she seems to have resigned herself to her presumed fate, who should walk into her life but New Transfer Student Hinata Mikami. Sunny and vibrant, Hinata quickly attaches herself to Megumi, slowly changing her life outlook.

A demo/sneak peek is available on itch.io

No relation to the 1978 Bulgarian comedy film, Warm