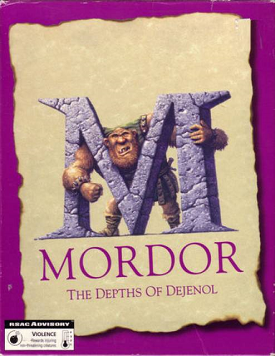 "Let he who ventures into the mines know that without skills, death is certain, and with skills, riches are vast and never-ending — but death will still hover over you."
— "Maxx", Master of the Villain's Guild.
Advertisement:

Released in 1995, Mordor: The Depths of Dejenol is a Role-Playing Game for the PC created by David Allen. The game is a clone of the early MUD game Avatar, released in 1979. Referred to as "Mordor" for short, this game does not take place in Tolkien's 'verse, but uses a similar fantasy setting as its backdrop. The storyline is that a great evil has appeared in the mines underneath the village, and brave adventurers from across the world have come to Dejenol to destroy its cause forever.

Of course, nearly everyone who plays it will forget that there even was a storyline due to its addictive gameplay. The game's quick-paced and easy-to-use interface is learned very quickly, which makes it ideal for flexible playing in short bursts or for hours on end. It can best be described as a single-player MMORPG: players create characters formed from one of the 9 different races and can join one or more of the 12 guilds within the city. The player can create multiple characters and join them together as a combat party for safety in the dungeon, or team up with other players' characters, sharing the treasure between them (up to 4 characters at a time). Interestingly, the game acts as a shared world; if one player finds a piece of equipment in the dungeon and sells it to the store, another player will find it and be able to buy it.

The game is split between the town and the dungeon. The town contains the bank, the shop, the guild halls where one can level up, the morgue where the character can be raised from the dead if when killed, and the confinement center where the player can buy creatures to use as battle companions alongside any other player-created characters. The dungeon, the all-encompassing hostile world of Mordor, has 15 different floors of rapidly-increasing difficulty. Combat is automatic; as soon as the player enters a room full of hostile monsters, battle will initiate until one of the two parties is dead, although players can run away from combat. With little effort to no effort, a player can run through the dungeon and score up great treasure and experience, hence the game's addictive playing style. Fully exploring the dungeon requires an incredible investment of time due to the game's rapidly scaling difficulty.

An official shareware demo, allowing full access of the first three floors, can be downloaded online.