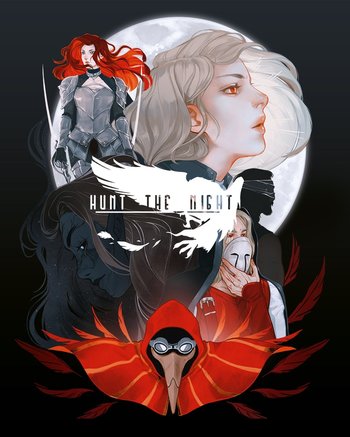 The Night devours those who are weak-minded.
Advertisement:

Hunt the Night takes place in a world where there is a long cycle between day and night. Humans rule the cycle of day, while the cycle of night is ruled by monsters. Every time the Night arrives, humanity is driven to near extinction and left to rebuild, repeating the process anew.

A group known as the Stalkers rose, their goal to save humanity from the Night by harnessing the power of darkness. Despite their best efforts, however, humanity was still crushed with every cycle. However, a Stalker known as Malakian eventually figured out a way to use crow feathers to transmit information, allowing human civilization to preserve its knowledge even after its destruction, bringing hope that the Night would one day be defeated. And nine ages after Malakian's time, humans figured out a way to seal off the Night, ushering in an everlasting day. However, a thousand years later, the seal is broken, and humanity faces annihilation once again.

Has nothing to do with Those Who Hunt the Night.

Hunt the Night provides examples of: