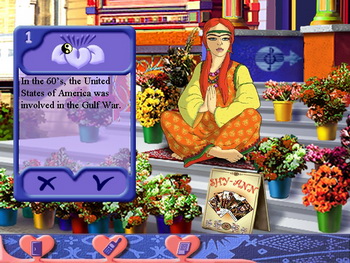 Shy-Ann asks you a question

The plot is as follows: the fifteen-year-old teenager named Julia is sent by her friend Mel back in time via Internet. She gets to the sixties, when both of her parents were young, and Mel tells her that someone wants to prevent that her parents meet, thus altering the timeline, so Julia won't be born at all. She needs to figure out who this is and ruin his/her plans. At the beginning of the game, Julia can choose whether she would seek her father or her mother, thus resulting in two different playthroughs and two culprits.

The game has a hint system, hints provided both by Mel and Shy-Ann, a spiritual barefoot Native American hippie flower girl, who reveals herself to be another time traveller. She asks Julia some questions about the Sixties, and gives you a hint if you answer them correctly.

The game has a To Be Continued-type ending, and indeed, there was a sequel set in Paris in the 1920s. Unfortunately, it ended in a similar way, and the third part (presumed to be set in London at the end of XIXth century) never saw the light of the day.