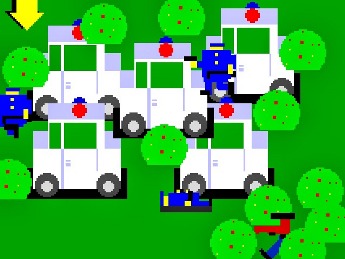 Of guns and cops...
Advertisement:

Gunner is a short freeware game by Jake Clover, which can be downloaded here

. It is very short, only taking place within a dozen screens. You appear to be a criminal of some kind with a gun and your goal is to move past the policemen out to get you. You can also crawl on the ground, hide in the local bushes and pick up glowing diamonds, though none of it matters. The game is notable for the extremely overblown gunshot and explosion sounds and sprites used, so be sure to turn the volume down if you decide to play it.