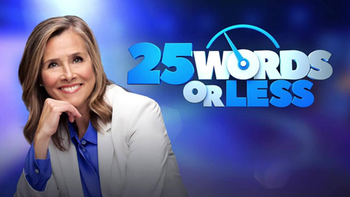 Former morning show and Who Wants to Be a Millionaire? host Meredith Vieira brings us yet another (syndicated) entry into the ubiquitous genre of word association-based game shows with celebrity partners. Akin to Password, this show emphasizes preciseness — with a focus on imposing limits on the number of words a cluegiver can use in total to describe a specific set of words.

In the first round, a member of each team (a civilian and two celebrities) bids on how many words they think they need to describe five specific words to their teammates in 45 seconds. The winner of the bid then has to do so — with success awarding 250 points for their team, and failure giving the points to the other team. Each member of the team gets a turn as the bidder slash cluegiver.

The second and final round is limited to 20 words, and is played only by the civilian contestants. But now, they get a chance to choose their fate: for each of their five words, the players get to take turns picking from sets of three (the first pick of each set alternates, beginning with the contestant behind after round 1), with each word designated as being easy, medium, or hard — worth 250, 500, and 1000 points each respectively (plus a 1000-point bonus if the celebrities successfully get all five words). The contestant with the most points after this round gets a chance to play a bonus round for $10,000.

25 Words or Less premiered over the summer of 2018 in a pilot run on Fox's owned-and-operated stations, before being syndicated nationally for the 2019-20 season. It is notably one of the first shows produced by Fox's new syndication division Fox First Run (created in the wake of the sale of 20th Century Fox to Disney).